My First Year As A Game Designer

Two days ago was my one year anniversary of being a game designer! March 13th of 2021 I published my first game on itch.io which marks my first year of writing & publishing indie tabletop roleplaying games & content. I thought to would be fun to do a thread about the games and my experiences.

I rediscovered roleplaying games in Februari of 2021, when we unpacked the last boxes after finally finishing our home office, and I discovered some of my old AD&D & GURPS books. Selling a bunch of these online led to me discovering ZineQuest 2021, and then spending most of the proceeds on zines.

I started following some indie ttrpg accounts, started a game group with some friends, and discovered a whole bunch of ttrpg Discords. One of the first ones I joined was the BrainTrust, still one of my favorite places, although I'm usually more active in smaller Discords. The big ones can feel a bit overwhelming, especially when the most activity happens during my night time.

Thanks to the BrainTrust I discovered the joy of the (itch) game jams: writing small games within in a short time with set constraints really helped me learn just to write stuff and more importanly: actually finishing my work.

Which brings me to my first game: Fragments, a supplement for Beak, Feather, & Bone by @possiblewgames for the #BFBJAM. Beak, Feather, & Bone is a collaborative worldbuilding game where as a group you create and describe locations. In Fragments I added some rules to create the map from hexes that could fit together in any way. Still proud of my first work, but I think I'd commission someone for the art if I would do a similar project now. I'm no artist! 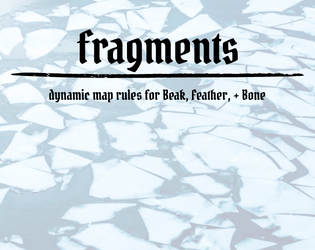 Next up was the very fun Pleasure-not-Business Card RPG Jam from Oz. Fitting a game on a business card is pretty damn hard!

I wrote two, one a bit more serious than the other. The first one was a hack of the great Tunnel Goons by Nate Treme. Nate Treme's take on OSR/NOSR stuff is highly influential on how I want to write: slightly gonzo, rules light and highly imaginitive.

Tunnel Goonies is a Tunnel Goons version in which you play 80s movie kids going adventures. I converted the basic stats, added some archetypes, and with some cheating added a second business card to also include a setting. This is still one of my favorite ones, and based on the download count also one of my more popular games. Which is hopeful considering I'm now working on Pine Shallows, which is a more complete kids adventure game, which grew out of this hack. If that sounds up you alley, make sure to keep an eye on this space! 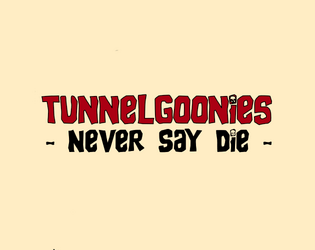 My second entry in the Pleasure-not-Business Card RPG Jam was a literary shitpost to be honest. I've always liked the stories of Jorge Luis Borges. Taking his The Library of Babel story and making it an endless dungeon while describing his just one hex? Count me in!

While I was working on my first big game at the same time, I did find some time to work on another game jam entry, this time for Adam Vass' Scratch & Claw, a game of mutant animals in the vein of extreme 90's action animal cartoons. My entry was Battle of the Bands, a one page adventure in which the characters enter a band contest. Autobiographical? Maybe! 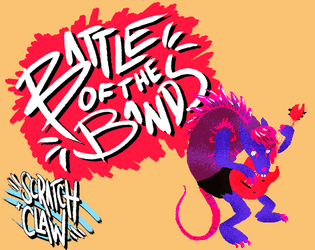 Feel like trying out game writing, and want to dip your toes into the water? Check out this great list of running game jams on itch, curated by the great mv.

One part of gaming I discovered as well was playing solo games, especially solo journaling games. Next to game writing I've also been writing fiction, and this was a very good way to combine them. Playing solo games can help spark creativity and even break writer's block, but the inspiration can work both ways: the setting of my first big game A Visit To San Sibilia started as a short story I wrote.

Thuiskomst (Coming Home), one of the stories in the anthology Nevelkinderen (Children of the Mist) takes place in San Sibilia, a city very much inspired by my visit to New Orleans and my love for the New Weird genre.

I'm planning to write another longer blogpost about the writing and influences of A Visit To San Sibilia, so I won't go into that to deeply. I did want to explore the themes of a city that seems to change while you're visiting and combining that with some of the great prompt based writing games like Alone Among the Stars by Takuma Okada and One Day at a Thyme by Jei D. Marcade. From The Machine by Adira and Fen Slattery I took a lot of inspiration from the sense of an impending end, by including an ending mechanism that is slightly unpredictable, but is always hanging over your head. 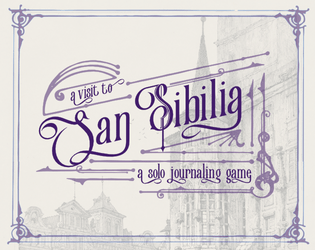 This was my most ambitious game so far. I found some great public domain art, that helped me sketch a city without telling the player how their San Sibilia looks and feels. I hired Tyler Crumrine from Possible Worlds Games to edit my writing, which resulted in great improvements in clarity and readability, I can highly recommend an editor generally, and specifically Tyler. He rocks!

For both the character creation and the prompts I used a mechanism in which you draw two cards, and combine the results of 2 tables, creating a great number of possible character types and journal prompts. The game is still getting great comments & reviews on the itch page, so clearly it resonates with a lot of people.

It is currently included in 2 bundles for very important causes, so if you want to get it as a pdf, you can get it together with a lot of other great games!

Get the TTRPGs for Trans Rights in Texas bundle or the Bundle for Ukraine!

After a successful itchfunding campaign it's also available in print at FloatingChair.Club.

Second half of the year

After San Sibilia I took a break from longer games a bit, which resulted in some game jam entries. The Walking Towers of Anzubia was an entry two to game jams: the Markdown Jam and the Pocket Places Jam. This is a system agnostic game supplement, some weird libraries to include in any game. Written in MarkDown, it is available in MarkDown, epub and pdf formats, with the pdf format foldable into a pocket mod after printing.

Art for Anzubia was used from the Patreons of Thomas Novosel & Evlyn Moreau. Both of them have great art available for usage in games, if you support their Patreons. Highly recommended! 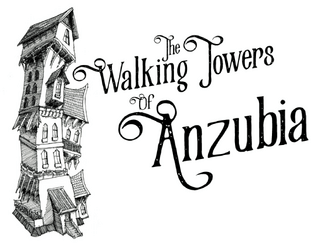 For Emiel Boven's DURF I wrote KLAS, some weird archetypes for DURF. Emiel is one of my fellow Good Sleep Collective members, and DURF is a great modern (N)OSR game. I love it!

Getting Some Good Sleep

One of places where the indie ttrpg scene lives, next to Twitter, are numerous Discord servers, I think I've joined about 25 at the moment, from general game design, through game type to single publisher focussed, with some specifically set up for a specific charity bundle.

One of my current favorites is one of the smallest as well. In October we started the Good Sleep Collective, a small group of European TTRPG designers, writers and artists. To be honest, our collective is invite only, but this helps us to curate a very open and supportive group of people, who (which is a great advantage in my opinion) are mostly in the same time zone.

In december I published Lost To The Starlit Reptiles, an entry to both the awesome Random Adventure Jam and the OZR Jam. It's an old school hexcrawl adventure with stats for OZR & DURF, two of my favorite OSR/NSR games. Besides some great art from my fellow Good Sleeper Bert, I used art from the Patreon of Evlyn Moreau. The tiles for the hex map game from the Patreon of Nate Treme's Highland Paranomal Society for the hex map. 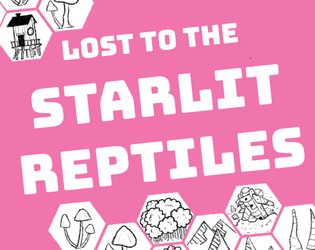 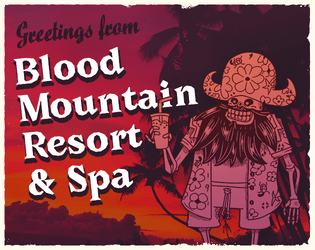 Plans for the next year

At any time I've got a few projects in progress in different stages, but I'm focussing mostly on Pine Shallows, tagline: small town, big adventures, which grew out of my Tunnel Goonies hack. It has grown into it's own rules set, with character backgrounds like the Mysterious Orphan, the Outsider, the Wiz Kid (and 6 more), and fleshed out town, a complete adventure and more.

We just had the first few playtest sessions, and I'm having so much fun with it! The cover of the book is done. Currently I'm mostly working on the budget & planning and trying to figure out what the best way is to tackle funding.

More news about Pine Shallows and other games coming up soon, keep a eye out on this site, or subscribe to my newsletter.

I hope my next year will be just as fun!

Want to be the first to know when there are a new blogposts or games? Subscribe to my newsletter.